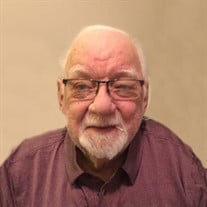 Walter R. Fritz May 19, 1925 – January 7, 2019 Walter R. Fritz, 93, of Manteno, Illinois, formally of Oak Park, Illinois peacefully passed away on Monday, January 7, 2019. He was born on May 19, 1925 in Unity Township, Pennsylvania the son of Walter B. Fritz and Rose Marie (Schick) Fritz. Upon finishing high school Walter served in the Army, Battalion D-563, during World War II. He received an honorable discharge as a sergeant after serving in the Ardennes, Central Europe, and Rhineland Campaigns as an Artillery Mechanic Aircraft 833. He was honored with the American Service Medal, the European African Middle Eastern Service Medal, and the World War II Victory Medal. After serving his country he worked as a truck driver until his retirement in 1991 from Yellow Freight. He received countless awards for safe driving. He was a member of the Teamsters Local 710, the American Legion Post 96, The American Truck Historical Society, and lifetime member of the Loyal Order of the Moose. English Bulldogs brought him great joy. His beloved Iron Mike and Jake greeted him enthusiastically as he entered Heaven’s gate. His hobbies included collectables, reading, (especially history,) and gardening roses and vegetables. He loved a good Poker game and watching sports. The Chicago White Sox and the Chicago Bears were his teams. Above all else Walter loved his children. He was a father/dad who was always there for them. He was blessed with 15 grandchildren, 16 great grandchildren, and 2 great, great grandchildren. He was a loving brother leaving behind a brother, Wendel (Katie) Fritz of Maryland and sister Sedella Goughler of Pennsylvania. He was a proud uncle and sincere friend to many. In addition to his parents, he was preceded in death by brothers Raymond and Melvin, sister Josephine, and grandson Jeremy. A Memorial Service will be held at 10am on Saturday, January 26, 2019 at St. Joseph’s Catholic Church, 207 South Main Street, Manteno, Illinois. Interment with Military Honors will be held at a later date in Forest Park, Illinois. Please sign his guestbook found on this page. In lieu of flowers memorial contributions may be made in his name to the Department of Veteran’s Affairs or to the charity of your choice.

The family of Walter R Fritz created this Life Tributes page to make it easy to share your memories.

Send flowers to the Fritz family.