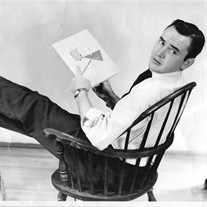 Robert (“Bob”) Wormington passed away, at age 98, on March 17th, 2020, exactly 5 years (to the day) after his beloved wife Louise passed. Bob grew up the youngest of 12 children and he was the last to pass, though more than one sibling lived into their nineties and one made it to 100. He lost his oldest son, Steve, more than two decades ago. He is survived by three sons, Bobby, Dave, and Jim, daughters-in-law Diane and Theresa, two grandchildren, Brian and Michelle, and three great grandchildren, Karma, Tayla, and Kiera. Bob had a loud, robust, contagious laugh which he shared often with family, friends, colleagues and strangers. He was kind, gentle, faithful, and hardworking. His Christian faith was an integral part of his identity and it shaped how he saw the world and how he treated people. He was loved by many and will be missed greatly. He is united with his beloved Louise. We love you, Dad. Thank you for all you were and all you did. See you down the road apiece.

The family of Robert "Bob" Wormington created this Life Tributes page to make it easy to share your memories.

Send flowers to the Wormington family.