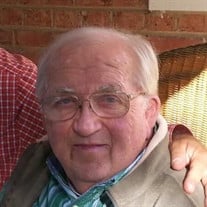 Robert Roach, 72, of Manteno, passed away Friday (July 29, 2016) at Presence St Mary's Hospital in Kankakee. He was born Feb. 15, 1944, in Evergreen Park, the son of James and Adele Goulet Roach. He married Lucinda Zemrowski on May 1, 1965, in Chicago. Robert was a 52-year member of Pipefitters Union Local 597, was past building inspector for Kankakee County, Manteno and Limestone. He also was a farmer. He served in the U.S. Army during Vietnam. Robert loved field training dogs with his son, fishing and hunting. He loved spending time with his family. He was a member of the National Shoot and Retrieve Association, Wilmington Masonic Lodge 208 and Danville Scottish Rite 32 Degree. Surviving are his wife, of Manteno; son, Michael Roach, of Bonfield; sister and brother-in-law, Sheila and Robert Zimmer, of Oak Lawn; sister-in-law, Eunice Monciviaz, of Batavia; and dear friend and former co-worker, Mary Beth McGovern, who unselfishly donated a kidney to Bob in 2007 and gave him a wonderful additional nine years of life. He loved her and was forever grateful to her. Preceding him in death were his parents; and two brothers, William Roach and James Roach Jr. Services will be at 10 a.m. Saturday at Maternity BVM Church in Bourbonnais, with the Rev. Jason Nesbit officiating. Burial will be held at a later date.

The family of Robert Roach created this Life Tributes page to make it easy to share your memories.

Send flowers to the Roach family.