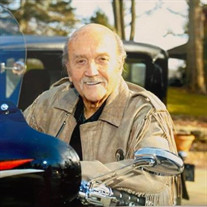 Robert Masse, 83, of Kankakee, passed away Wednesday, June 2, 2021, peacefully at his home. He was born June 26, 1937, in Kankakee, the son of Paul and Marguerite (Casset) Masse. He married Phyllis Thorn on August 17, 1957, in Kankakee. Robert enjoyed motorcycles, cars, and NASCAR. When the grandkids visited, they knew exactly where to find him, in “Bob’s Garage”. He drove for Yellow Freight until retirement. He was a member of St. Patrick’s Catholic Church in Kankakee. Robert is survived by his daughter, Robin (Ken) Jones of Florida; brothers, Tom (Pat) Masse of Texas, Sid (Barb) Masse of Kankakee and Ted Masse of Arizona; sister, Sue (Carl) McQueen of Manteno; grandchildren, Nicole Jones of Bourbonnais, Tiffany (Brandon) Lanoue of Ashkum, Brandon Jones (Colleen Slattery) of Bradley, Amber Masse of South Carolina, and Trinity (Ryan) Collins of Washington; six great-grandchildren, one great-great grandchild, several nieces and nephews. He is preceded in death by his wife, parents and son, Robert Masse. A private memorial service will be held for the family. Cremation rites have been accorded. Memorials may be made to Uplifted Care of Kankakee.

The family of Robert P. Masse created this Life Tributes page to make it easy to share your memories.

Send flowers to the Masse family.