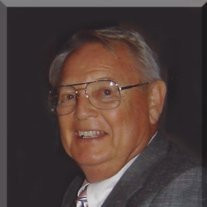 Robert D. Hilsenhoff, 82, of Manteno, died Thursday (May 2, 2013) in the emergency room at Riverside Medical Center in Kankakee. Visitation was from 1 p.m. to 6 p.m. Sunday at the Brown Funeral Home in Manteno. Funeral services were held at 10 a.m. today at the Manteno Presbyterian Church, where he was a member. Burial was in Elmwood Cemetery, Manteno. Memorials may be made to the Manteno Presbyterian Church. Mr. Hilsenhoff, along with his mother and two brothers, operated Hilsenhoff Pharmacies in Manteno and Peotone for many years. He was born July 6, 1930, in DuQuoin, the son of Leslie E. and Clementine Johnson Hilsenhoff. He received a Bachelors in Business Administration degree from Northwestern University, a Masters in Business Administration degree from Southern Illinois University, and a 5-year Pharmacy degree from Drake University. Mr. Hilsenhoff served in combat in Korea with the 3rd Infantry Division, 65th Infantry Regiment. He advanced from private to infantry battalion sergeant major after three and a half months on the front lines. He earned the Combat Infantryman Badge, Bronze Star, Korean Service Ribbon with 2 Bronze Service Stars and five other medals. He was a life member of the American Legion, the VFW, the Korean War Veteran Association and the Korean War Veterans National Museum and Library. Surviving are his wife, the former Clara Guimond, whom he married Aug. 23, 2003, in Manteno; daughter, Lizabeth Ann (Hilsenhoff) Chesser; stepsons, Russell Guimond, Michael Guimond, Donald (Claudia) Guimond, David (Jennifer) Guimond; grandsons, Olindo Robert Alo' and Anthony Joseph Alo'; nine stepgrandchildren and four stepgreat-grandchildren; two sisters-in-law, Donna Hilsenhoff and Lorraine Hilsenhoff; and several nieces and nephews. He was preceded in death by his parents; brothers, Joseph G. Hilsenhoff and Leslie W. Hilsenhoff; and his first wife, Patsy Poole.

Robert D. Hilsenhoff, 82, of Manteno, died Thursday (May 2, 2013) in the emergency room at Riverside Medical Center in Kankakee. Visitation was from 1 p.m. to 6 p.m. Sunday at the Brown Funeral Home in Manteno. Funeral services were held at... View Obituary & Service Information

The family of Robert Hilsenhoff created this Life Tributes page to make it easy to share your memories.

Send flowers to the Hilsenhoff family.