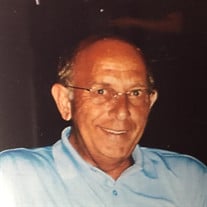 Richard "Dick" Frank Kozuch, 71, went to his eternal home on July 12th, 2016. He was the son of Frank and Edna (Wnent) Kozuch, born February 13th, 1945 in Brooklyn, New York. He is survived by his wife of 49 years, Karen Cunnington Kozuch, and daughters, Kathy (Steve) Daub of Ankeny, Iowa, and Valerie (Dave) Yaros of Glen Ellyn, Illinois. He had three beloved grandchildren: Hunter Daub, Jett Yaros, and Ava Yaros. His sister, Theresa (Troy) Jurs of Manteno also survives. After graduation from Southern Illinois University Carbondale, Dick opened and managed Eagle Food Stores in Bradley and Kankakee. He went on to become a district manager before he retired in 2010. He was an athlete his entire life, avid golfer, and loyal Chicago sports fan. Dick enjoyed managing the Manteno Golf Club for two years. He was known in the community for his collection of over 4,000 logo golf balls and vintage cars. He was a member of St. Joseph Church in Manteno since moving to the area in 1975. While there, he became a Fourth Degree volunteer of the Knights of Columbus, and served in several offices including Grand Knight. In 2011 he was named "Citizen of the Year" by the Manteno Historical Society. Dick loved spending quality time with his family and friends, hosting many cookouts and pool parties at his home, and holidays were extra special for him. Preceding him in death were his parents, Frank and Edna Kozuch, and a sister, Christine Hanley. Visitation will be Friday, July 15th from 4-8 pm at the Brown Funeral Home in Manteno. A prayer service, and anyone who would like to make a tribute to Dick will begin at 7:30. A celebration of life mass will be held on Saturday, July 16th at 10:30 am at St. Joseph Church in Manteno. Burial will be at the St. Joseph Cemetery. Memorials may be made to VITAS Innovative Hospice Care of Tinley Park, Illinois.

Richard "Dick" Frank Kozuch, 71, went to his eternal home on July 12th, 2016. He was the son of Frank and Edna (Wnent) Kozuch, born February 13th, 1945 in Brooklyn, New York. He is survived by his wife of 49 years, Karen Cunnington Kozuch,... View Obituary & Service Information

The family of Richard "Dick" Frank Kozuch created this Life Tributes page to make it easy to share your memories.

Richard &quot;Dick&quot; Frank Kozuch, 71, went to his eternal home on...

Send flowers to the Kozuch family.