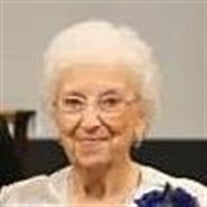 Nancy Elizabeth Harvick, 80, of Manteno, passed away Tuesday (April 19, 2016) at Riverside Medical Center in Kankakee. She was born Aug. 3, 1935, in Blairsville, the daughter of Hugh and Miriam Anderson McClelland. Nancy married Merrell Dale Harwick on July 2, 1955, at the United Methodist Church in Manteno. They were married for 55 years. He preceded her in death. She was a homemaker and volunteered for Kankakee County Center Against Sexual Assault (KC-CASA) and the Court Monitoring System. Nancy also was a member of the First Baptist Church of Manteno, was a past member of The Eastern Star, an avid reader, enjoyed word puzzles and loved to spend time with her grandchildren and great-grandchildren. Surviving are a son, Bryan Harvick; daughters, Dala Sauls, Teresa Ciaccio and Lorna and Brian Prince; brother, Dave and Shirley McClelland; grandchildren, David and Ariel Sauls, Jonathan Ciaccio, Parker Ciaccio and Danielle Harvick; step-grandchildren, Jason Prince, Dusty Contreras, Tiffany Prince, Amber Prince and Dominique Livingston; 11 great-grandchildren; many nieces and nephews; brother-in-law, George and Judy Harvick; and sister-in-law, Ruth Harvick. In addition to her husband, preceding her in death were her parents; and a grandson, Brock Prince. Visitation will be from 1 p.m. Sunday until the 5 p.m. funeral services at Brown Funeral Home in Manteno, with the Rev. Hal Trovillion officiating. Burial will be at 11:30 a.m. Monday in Abraham Lincoln National Cemetery in Elwood. Pallbearers will be Jody and Daniel Harvick, Parker and Jonathan Ciaccio, Jason Prince and David Sauls. Memorials may be made to Kankakee County Center Against Sexual Assault (KC-CASA).

The family of Nancy Elizabeth Harvick created this Life Tributes page to make it easy to share your memories.

Send flowers to the Harvick family.