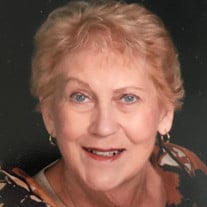 Karen Ann (Cunnington) Kozuch, 72, passed away peacefully with her daughters by her side on February 19, 2018 in Glen Ellyn, IL. Karen was born on July 1, 1945, the oldest of four children born to Wayne and Yvonne (Jackson) Cunnington both preceded Karen in death. She was also preceded in death by her loving and devoted husband of 49 years, Richard “Dick” Kozuch and survived by her two daughters, Kathy (Steve) Daub of Ankeny, IA, and Valerie (David) Yaros of Glen Ellyn, IL. She was blessed with three grandchildren, Hunter Daub, 15, and twins Ava and Jett Yaros, 9. She is also survived by her three siblings Judy (Greg) Shelton of Flatwoods, KY, Cheryl (Marv) Pauly of Sheboygan Falls, WI, and Judge Tom (Dawn Landwehr) Cunnington of Kankakee. Karen’s education through high school was in Kankakee. She was a brownie and girl scout from second through eleventh grades. She was active in church activities as well as singing in the Choir and being in M.Y.F. at Asbury Methodist Church. She loved swimming and was active at the YMCA. She decided she wanted to be an elementary school teacher so she got a degree in elementary education at Northern Illinois University. While there, she joined Alpha Xi Delta sorority where she made many new friends and participated in various philanthropic activities. Karen met her future husband, Dick at a Sadie Hawkins dance in her college dorm. They dated throughout college and married two weeks after Karen’s graduation in 1967. The couple then moved to Rockford where they both taught school. In 1975, the family moved to Manteno, where Karen stayed at home with their daughters while also doing substitute teaching for many years. She then decided to go back to school and earned a Master Degree in Counseling Psychology from Governors State University. She worked as a counselor at Riverside Hospital, Oakside Clinic, Farm Resource Center and the Helen Wheeler Center before retiring in 2010. Karen liked being involved in her church and community at St. Joseph’s in Manteno where she was a Eucharistic Minister, Lector and delivered communion to the sick. She was very active in the Junior Women’s Club in Kankakee and more recently the Manteno Woman’s Club. She enjoyed playing in a Euchre Club for over 25 years, belonged to a group called the “Gabettes” / Red Hat Society and loved spending time with dear friends and family. She was compassionate and one who truly cared about other people and their needs. Visitation will be Friday, February 23rd from 3-7 pm at Brown-Jensen Funeral Home in Manteno. A prayer service and anyone who would like to make a tribute to Karen will begin at 6:30. A celebration of life mass will be held on Saturday, February 24th at 11:00 am at St. Joseph Church in Manteno. Memorials may be made to St. Joseph Church or to the American Lung Association.

Karen Ann (Cunnington) Kozuch, 72, passed away peacefully with her daughters by her side on February 19, 2018 in Glen Ellyn, IL. Karen was born on July 1, 1945, the oldest of four children born to Wayne and Yvonne (Jackson) Cunnington both... View Obituary & Service Information

The family of Karen Ann Kozuch created this Life Tributes page to make it easy to share your memories.

Send flowers to the Kozuch family.