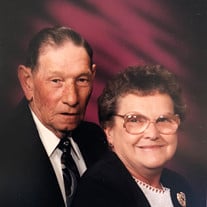 Mary Lou Cavitt passed into New Life on September 22, 2018 at River North Rehabilitation Center at the age of 87 after a lengthy illness. Mary Lou was born June 10, 1931 in Cypress, Illinois to Cletus Martin and Edith Dunning Martin. Jesse Carl Cavitt passed into New Life on September 24, 2018 at Riverside Hospital, Kankakee at the age of 88. He had been ill for some time and died within 48 hours of his wife of 68 years. Jesse was born October 20, 1929 in New Burnside, Illinois to Arthur Y. Cavitt and Noma Clair Watkins Cavitt. Mary Lou Cavitt and Jesse Carl Cavitt were married on September 30, 1949. To this union were born two sons; Carl Dean born July 10, 1950 and Cletus Paul born September 27, 1956. They are survived by their sons and daughters-in-law, Carl and Kathryn Cavitt and Paul and Cindy Cavitt. They are also survived by grandsons, Jason Cavitt (Joyce), Aaron Cavitt, and Nathan Cavitt (Drew) as well as granddaughters, Jessica Gallagher (Michael), and Julie Cavitt. Great-grandchildren are Avery Gallagher, Quinn Gallagher, Roland Smith, Katie Smith, Reagan Cavitt, and Kennedy Cavitt. Both are survived by many nieces and nephews and many other relatives and friends. Mary Lou also is survived by her sister and brother-in-law, Bonnie and David Hogue, and a sister-in-law, Virginia Martin. She was preceded in death by her father, mother, and brother, Leonard Martin. Jesse was preceded in death by his father, mother, brothers Lester, Gale, Robert, Cecil, and John and sisters, Nadine and Bonnie Lou. Both were preceded in death by their twin grandsons, Dean and Douglas Cavitt. Mary Lou and Jesse were members of and involved at First Baptist Church of Manteno for many years as they served in hospitality, missions, and many other areas. They enjoyed camping in their RV and spent many winter months in Texas in their RV. They also enjoyed going to small engine shows and selling sweatshirts that they had decorated. Mary Lou and Jesse were also very involved in the Masonic Eastern Star and she served with great enjoyment as Worthy Matron while Jesse served as Worthy Patron. Jesse was a Mason of the Manteno Masonic Lodge #636 for many years and served in a variety of positions. They enjoyed southern gospel music as well as traditional hymns. Both were very dear to the children of First Baptist Church of Manteno because they always had candy or gum for them and kind and gentle encouragement. Visitation for both will be 4:00-8:00 pm on Friday, September 28th at First Baptist Church of Manteno. Funeral services will be at 11 a.m. Saturday, Sept. 29, also at First Baptist Church, with the Rev. David Peterman officiating. Brown-Jensen Funeral Home in Manteno is handling the arrangements. Burial will be in Elmwood Cemetery in Manteno where they will be laid to rest together. Memorials may be made to the First Baptist Church in Manteno (300 E 3rd St, Manteno, IL 60950) or Hospice of Kankakee Valley (482 Main St NW, Bourbonnais, IL 60914). Sign their guestbook at www.brownjensen.com

The family of Jesse & Mary Lou Cavitt created this Life Tributes page to make it easy to share your memories.

Send flowers to the Cavitt family.