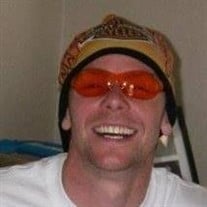 Jeffery "Jeff" J. Franc, 39, of Manteno, passed away Saturday (Nov. 29, 2014) in Manteno. He was born May 25, 1975, in Blue Island, the son of Jeffery and Sandra Delawder Franc. Jeff married Gretchen Dietz on April 3, 1999, in Manteno. Jeff was a sheet metal worker with Union 265. His hobbies including watching his kids play football and wrestle, spending time with his family and sharing stories of his life. Surviving are his wife, of Manteno; sons, Anthony M. Franc, of Manteno, Christian S. Franc, of Manteno, and Jeffery L. Franc II, of Manteno; sisters and brothers-in-law, Sarah Franc, of Momence, Kristina Franc, of Portsmouth, Ohio, and Sarah and Kevin Darby, of Portsmouth, Ohio; brothers and sisters-in-law, Jason Franc, of Momence, Josh and Lynette Franc, of Momence, Jeremy and Christina Franc, of Steger; and his stepmother, Marada Barbato, of Momence. Preceding him in death were his parents; and brother, Jason Penansky. Visitation will be from 3 p.m. Friday until the 7 p.m. funeral services at Freedom Life Center in Manteno. Cremation rites will be accorded. Memorials may be made to the Franc Family Memorial at Municipal Bank. Please sign his online guestbook at brownfhmanteno.com.

The family of Jeffery J. Franc created this Life Tributes page to make it easy to share your memories.

Send flowers to the Franc family.