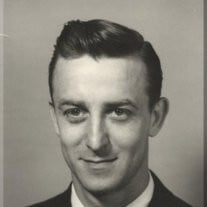 Longtime area teacher, coach and referee, Harvey Battrell, passed away peacefully Wednesday (May 15, 2013). Visitation will be from 3 p.m. Monday, May 20, until the 7 p.m. funeral services at the Brown Funeral Home in Manteno. Burial will take place at 11 a.m. Tuesday, May 21, in Abraham Lincoln National Cemetery in Elwood. A devoted father, grandfather and great-grandfather, he was born Oct. 31,1923, in Pittsburgh Pa., the son of Frank and Marie Battrell. His family moved to Dwight in 1940. Upon graduation from high school Mr. Battrell entered military service with the U.S. Navy. He served in both the Atlantic and Pacific theaters of operations during World War II and was assigned to occupation forces immediately following Japan’s surrender. Following the war he attended Western State Teachers College where he was a standout varsity pitcher. He continued a semi-professional baseball career for several years after graduating from college. He married the former Naomi Rogers in 1951 and began a 35-year teaching and coaching career. Mr. Battrell was head basketball and baseball coach at Brimfield and Manteno High Schools. Moving to Kankakee, he also taught, coached and was athletic director at West Junior High School from 1961 to 1983 and completed a master's degree from the University of Illinois. He also became a referee in the later part of his career. Mr. Battrell is survived by his two children, Janice (Dr. Sayed) Ghazi, of Orland Park, and Andrew (Nel) Battrell, of Limestone; and his grandchildren, Jennifer(Jason) Chio, Curtis and Lindsey Battrell. He was great-grandfather to Bella, Taylor and Joey Chio. He is also survived by his brother, Robert. His wife, parents and one brother, Andrew, preceded him in death.

Longtime area teacher, coach and referee, Harvey Battrell, passed away peacefully Wednesday (May 15, 2013). Visitation will be from 3 p.m. Monday, May 20, until the 7 p.m. funeral services at the Brown Funeral Home in Manteno. Burial will take... View Obituary & Service Information

The family of Harvey Battrell created this Life Tributes page to make it easy to share your memories.

Send flowers to the Battrell family.