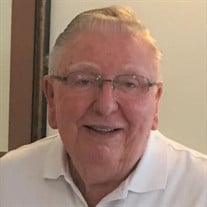 Frank E. “Bud” Quinn Jr, 88, of Manteno, passed away Wednesday, May 20, 2020 at his home. He was born April 25, 1932 in Chicago, a son of Frank E. Sr. and Catherine (McBride) Quinn. On July 29, 1967 he married Maureen Appel at St. Felicitas Church, Chicago, IL. He served in the United States Navy during the Korean War. He retired proudly after being employed for 35 years as an Electronics Engineer at the University of Chicago’s Enrico Fermi Institute working in the High Energy Physics Laboratory. Frank is survived by his loving wife, Maureen; children, Francis III (Geraldine) Quinn, Timothy (Kari) Quinn, Thomas (Theresa) Quinn, Patrick Quinn, and MaryEllen (Robert) Quinn-Williams; grandchildren, Francis IV, Maura, Erin, Christopher, Katie, Lauren, Joseph, and John; and was an uncle to many, including his dear niece, Jill Quinn. He is preceded in death by his parents, a sister Mary (Ed) Fleming, and brothers, James (Mary) and William Quinn. Bud was the former president of Most Holy Redeemer Athletic Association where he had been a parishioner. He was a current parishioner at St. Joseph Catholic Church and was a member of the American Legion Post 755, Manteno. Services are private and will be held at the convenience of the family. Burial will be at Holy Sepulchre Cemetery, Alsip, Illinois.

The family of Frank E. "Bud" Quinn created this Life Tributes page to make it easy to share your memories.

Send flowers to the Quinn family.