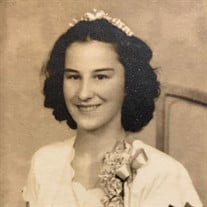 Faith Amelia Russert (Scheibert), 87, of Manteno, passed away, Thursday, December 17, 2020. She was born June 7, 1933 in Detroit, MI a daughter of Reverend Ernest and Alma (Stark) Scheibert. On October 19, 1952 in Chicago, Illinois she married, Reverend Luther E. Russert. Faith was a loving daughter, wife, mother, and friend. She was a lifelong Lutheran and huge Chicago Cubs fan. Faith enjoyed travel, cookbooks, collecting, and her garden. She listened to the Lutheran Hour her whole life. She was an active member of Risen Savior Evangelical Lutheran Church, Manteno, IL. As a pastor’s daughter and pastor’s wife, Faith was committed and dedicated to all of the churches for which she was a member and kept in contact with those churches after God called her and Luther to different parts of the country. Faith is survived by her sons and daughters-in-law; son, Luther Russert and his wife Kim of North Canton, Ohio; son, Paul Russert and his wife Dawn of Manteno, Illinois; daughter, Faith Ann and her husband Jose Herrera of Zaragosa, Spain; son, Daniel Russert and his wife Branka of Libertyville, Illinois; and son, John Russert and his wife Tetiana (Chicago, Illinois); her Sister, Rhoda Knudson of Minnesota and her sister and brother-in-law Irma and Michael Kelly of Pennsylvania. Grandchildren; Luther (Kim’s) children: Jennifer, Leisl, Lauren (Chad), Larissa, step grandchildren Nathan (Timberly), Aaron (Klarissa); and their children George, Rebecca, and Allison. Paul (Dawn’s) children: Courtney (Jonathan) Majerski and their children McKenna, Jemma, and Marek; Natalie (Jeffery) Perrone; and their children Ryker and Lincoln; Jordan (Heidi) Russert and their children: Carson, Tatum, and Maddux. Faith Ann (Jose) Herrera of Zaragosa, Spain and their children: Jose (Giessen, Germany), Daniel (Zurich, Switzerland), and Pablo (La Rioja, Spain). Daniel (Branka’s) and their children: Garrett ( ) and Nolan Russert; and John (Tetiana) and son David and step daughter Kateryna. She is preceded in death by her husband, Reverend Luther E. Russert; her father, Reverend Ernest Scheibert and mother, Alma Scheibert (Stark); her brothers, Ernest and Harold; and her sisters, Ruth and Lois. Those wishing may send gifts to Risen Savior Ev. Lutheran Church in Manteno or to The Lutheran Hour. A celebration of life will be held at a later date to be announced by the family.

Faith Amelia Russert (Scheibert), 87, of Manteno, passed away, Thursday, December 17, 2020. She was born June 7, 1933 in Detroit, MI a daughter of Reverend Ernest and Alma (Stark) Scheibert. On October 19, 1952 in Chicago, Illinois she... View Obituary & Service Information

The family of Faith A. Russert created this Life Tributes page to make it easy to share your memories.

Send flowers to the Russert family.