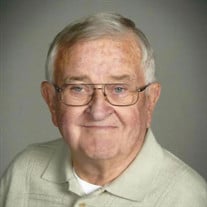 David W. Skinner, 79, of Manteno, IL passed away peacefully on Tuesday, May 5, 2020 at Miller Healthcare Center. David was born April 18, 1941 in Richmond, Indiana, the son of Blair and Louise (Knoll) Skinner. His parents preceded him in death. He was a graduate of Driver High School in Winchester, Indiana and graduated from Olivet Nazarene University in 1971 with a bachelor of science degree in Religious Education. David was a member of Manteno Nazarene Church where he was organist for over 35 years. David was a piano and pipe organ technician - building, rebuilding, servicing and tuning pipe organs in the Kankakee area as well as Michigan, Indiana, and Wisconsin. He maintained many organs in the Chicago area, including the Rockefeller Chapel at the University of Chicago. He began working with representatives of both the Reuter Organ Company and the Kimball Piano and Organ Company while in college and in 1971 set up his own business. In addition to his parents, David was preceded in death by his brother, Jerry Skinner of Marion Indiana, and stepfather and stepmother, Herbert and Mazetta Metcalfe of Monroe, Indiana. Surviving are his wife, Connie Skinner of Manteno; son and daughter-in-law, Ryan and Rachel Skinner; daughter, Megan Skinner, both of Kankakee; two grandchildren, Rianna Skinner and Riley Skinner; one sister, Marjorie (Marvin) Baldwin of Portland, Indiana; one sister-in-law, Lois Skinner, from Marion, Indiana; four stepbrothers: Philip (Edie) Metcalfe from Phoenixville, PA; Wayne (Janet) Metcalfe from Springport, Indiana; Nelson (Marta) Metcalfe from Middletown, Indiana; and Steven (Debbie) Metcalfe from Springport, Indiana along with several cousins, nieces and nephews. The family would like to express their gratitude to the nurses, CNA’s and support staff at Riverside Medical Center, Miller Healthcare Center in Kankakee, and Hospice of Kankakee Valley for their compassionate care and support of David during his illness. Cremation rites have been accorded by Brown-Jensen Funeral Home, Manteno. A private memorial service for the immediate family will be held at a later date.

David W. Skinner, 79, of Manteno, IL passed away peacefully on Tuesday, May 5, 2020 at Miller Healthcare Center. David was born April 18, 1941 in Richmond, Indiana, the son of Blair and Louise (Knoll) Skinner. His parents preceded him in death. He... View Obituary & Service Information

The family of David W. Skinner created this Life Tributes page to make it easy to share your memories.

David W. Skinner, 79, of Manteno, IL passed away peacefully on...

Send flowers to the Skinner family.