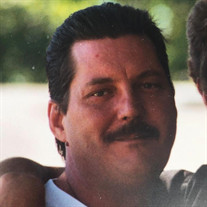 Charles R. Fitak, 58, of Manteno passed away on Monday, October 25, 2021 at his home. He was born on January 23, 1963 the son of Paul and Dorothy Fitak. He married Delores Eastman on September 22, 1995 in Markham, IL. He was a devoted father and loving husband. Charles loved his family and friends deeply. He also enjoyed playing the guitar, going fishing, playing bags, and having a drink with his close friends and family. He is survived by his loving wife, Delores Fitak, 6 children; Charles Fitak of Glen Ellen, Nicholas Fitak of Chicago, Ashley Eastman of St. George, Rachel (Armando) Lupian of IN., Ryan (Nikki) Eastman of Beecher, Jacob Fitak of Manteno, 7 grandchildren; Michael, Melanie, Anthony, Zelda, Mia, Armando, Isaac, 5 siblings; Sandy (Bob) LeFager of AZ., Susan Schoenwetter of FL., Paul (Mary) Fitak of Manteno, Dorene (Howie) Coates of WI., Jerome (Kelly) Fitak of Plainfield. He is preceded in death by his parents and a brother-in-law, Tom. Visitation will be held on Tuesday, November 2, 2021 at Brown-Jensen Funeral Home from 3-9pm. A visitation will be held on Wednesday, November 3, 2021 at Brown-Jensen Funeral Home form 10am until the service at Noon. Burial will follow at All Saints Cemetery in Bourbonnais.

The family of Charles R. Fitak created this Life Tributes page to make it easy to share your memories.

Charles R. Fitak, 58, of Manteno passed away on Monday, October...

Send flowers to the Fitak family.