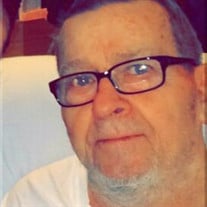 Carbie "Bud" Smith, 77, of Manteno, passed away Sunday (May 31, 2015) at his home, surrounded by his loving family. He was born Jan. 20, 1938, in Washington, N.C., the son of Carbie and Annie Walace Smith. He married Barbara Classon on Feb. 20, 1958, in Washington, N.C. Mr. Smith retired from Illinois Central Gulf Railroad after 43 years as an engineer. He was a member of St. Joseph Catholic Church in Manteno. He loved "boating," horse racing and watching NASCAR. Most of all, he loved spending time with his family. Survivors include his wife, of Manteno; daughters, Rita Ward, of Manteno, Nicolette and Michael Mathews, of Limestone, Carrie Rogers and John McDermont, of Manteno, and Carlene and Jerry Toler, of Manteno; grandchildren, Mandy, Matt and Michelle, Eli and Traci, Ashley, Erica, Jessie, Brenden and Drew Carbie; great-grandchildren, Faith, Shaiden, Skylar (Blue Eyes), Michael, Mireya and Bohnam John; sister and brother-in-law, Joyce and Lynwood Boyd, of North Carolina; brothers and sisters-in-law, Alton and Loretta Smith, of North Carolina, and Roland and Gladys Smith, of North Carolina; and many beloved nieces and nephews. Preceding him in death were a son, Michael Smith; brother, Earl and Faye Smith; and infant sister, Reita Smith. Visitation will be from 5 p.m. Thursday until the 7 p.m. funeral services at Brown Funeral Home in Manteno. Cremation rites were accorded. Memorials may be made to the wishes of the family.

The family of Carbie Smith created this Life Tributes page to make it easy to share your memories.

Send flowers to the Smith family.